The standard formula of Agris Itinere provides an 8-day tour, from your arrival in Palermo to your departure from Catania, passing through fantastic experiences of central and southern Sicily.

The tour is highly customizable with the addition of field harvests according to the seasons of the year.
You can also choose the weekend formula or the 5-day tour.
Contact us to create YOUR TOUR of Sicily with Agris Itinere.

Arrival of participants in Palermo.
Welcome cocktail and reception at 7.00 pm.
Presentation of the program.

Dinner and overnight stay at the hotel. 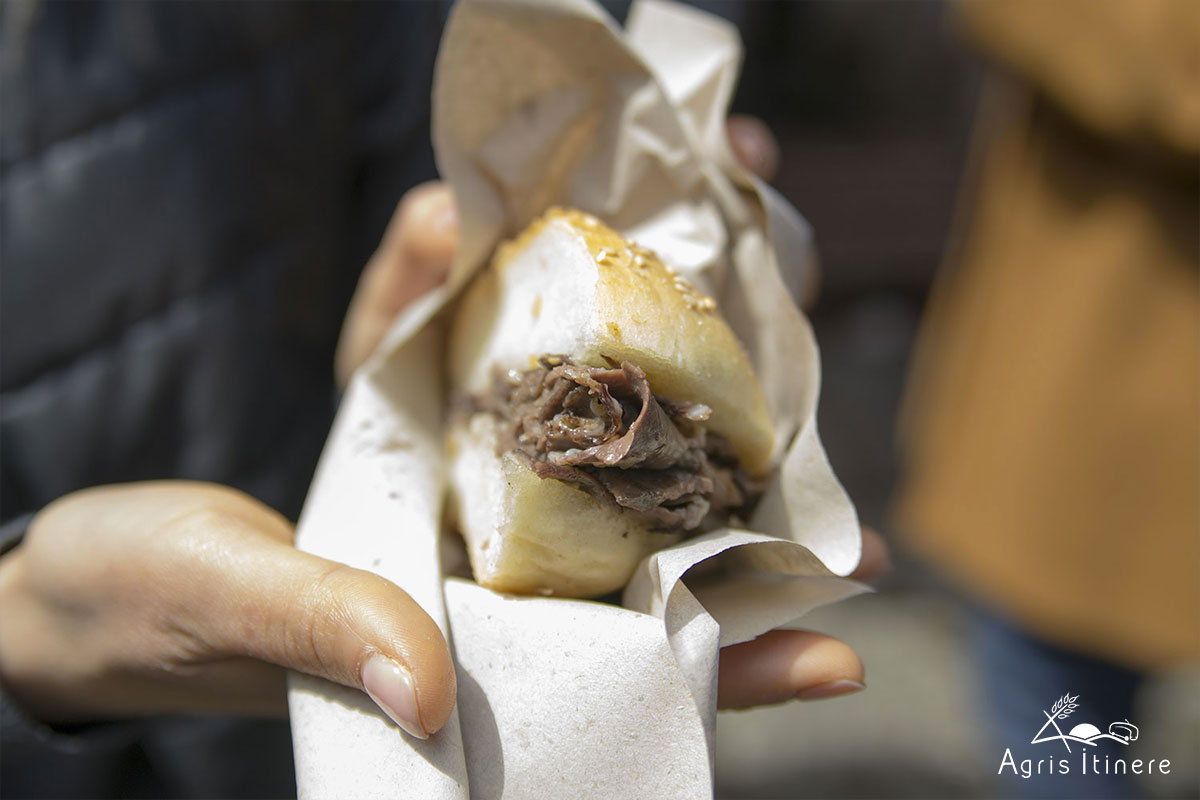 Meet with our guide with whom you will discover the most intimate secrets of Palermitan popular culture that range from the culinary delicacies of Arab and Jewish origin to the urban legends that still live in the heart of a millenarian city.

Departure at 10.30 am from Piazza Verdi, opposite the steps of the Teatro Massimo, with a walk through Piazza Verdi, the Capo market, the Church of the Immaculate Conception (optional visit, € 1 donation), the Sant’Agostino market, Piazza San Domenico , the Vucciria market, the Quattro Canti, Piazza della Vergogna, Piazza Bellini, the Ballarò market and the Cathedral, to discover the ancient flavors and the true soul of the popular markets of Palermo, interspersed with a series of stops to taste 5 local specialties accompanied by a glass of wine, and to admire the monuments and main squares of the beautiful Panormus, the 2018 Capital of Culture.

Transfer to Monreale, where it’s possible to admire the Arab-Norman magnificence of the Cathedral. This treasure dates back to the 12th century and shows the various architectural influences of both the Norman and the Arab culture.

Departure for Agrigento. Upon arrival at the Relais | Hotel accommodation in reserved rooms and overnight stay. 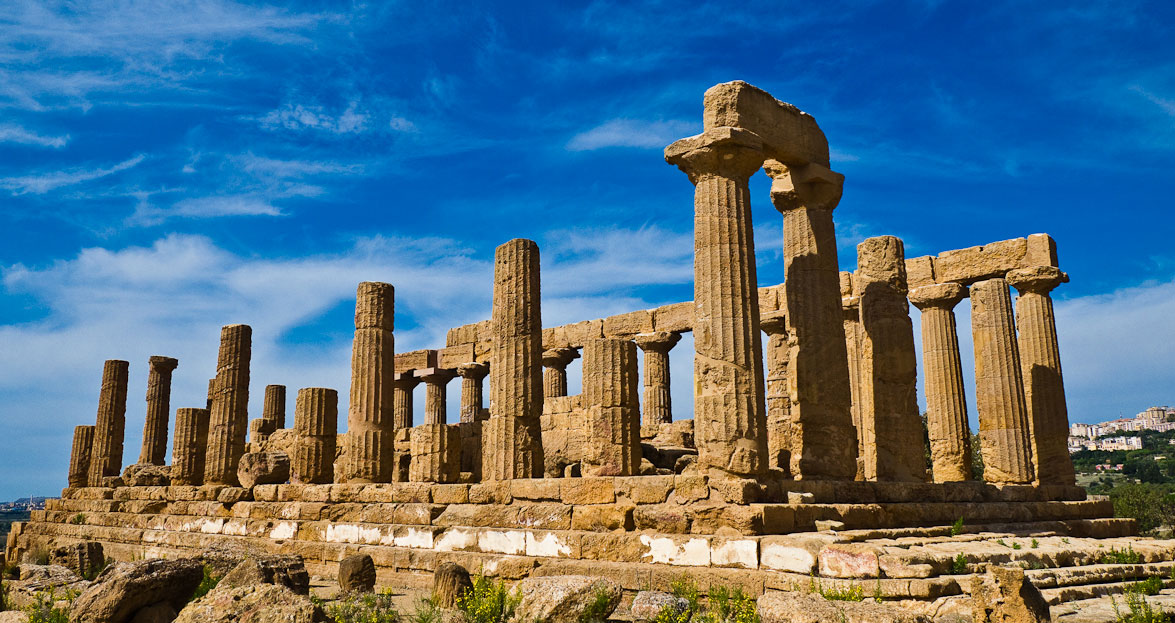 Agrigento, the Valley of the Temples, the Garden of Kolymbethra and Scala dei Turchi

After breakfast, a private vehicle will take you to the Valley of the Temples, which is one of the most fascinating archaeological itineraries in Sicily. It is framed by an extraordinary harmony between nature and the ancient monuments themselves, among the magnificent remains of the ancient Greek colony of Akragas. On this site, declared a World Heritage Site by UNESCO, the Doric temples of the 5th century BC in tuff sandstone shine a warm amber color that is particularly striking at sunset, while the contrast between the color of the stone and the green of the fields during the winter and spring months leaves visitors literally breathless: from the Hellenistic-Roman quarter to the excavation of the Roman Theater, among the almond and olive grove of the Park, to lose oneself in front of the imposing Temple of Concordia located along the “Via Sacra.”

We continue on, leaving the Temple of Juno behind, to see the Paleo-Christian necropolis and the Hardcastle house towards the Temples of Hercules and Zeus and finish at the Sanctuary of Demeter Persephone. Between the Temple of Castor and Pollux and Vulcan, extends a vast green area known as the “Garden of Kolymbethra” that offers remarkable arboreal and scenic variety. In the steepest areas there are species typical of Mediterranean scrub, like myrtle, mastic, terebinth, mock privet, euphorbia and gorse. In the flat areas of the valley floor, beyond the small creek bordered by reeds where white willow and poplar grow, the citrus grove with lemon, mandarin and orange trees of ancient varieties extends, and is irrigated according to ancient techniques of Arab tradition. Where the water doesn’t arrive, mulberries, carob trees, prickly pears, almond trees and gigantic “Saracen” olive trees can be found.

Consumption of a “Countryman’s Rustic Basket” in the shade of the majestic trees of the garden.

In the afternoon, we will visit the Scala dei Turchi near Realmonte, a spectacular limestone cliff in the form of terraces that look like giant steps that ascend from the small white beaches below.

Dinner (not included) and overnight stay.

After breakfast, a private vehicle will depart for Sant’Angelo Muxaro, a small village with a millenarian history 30 km from Agrigento, which stands on a solitary hill in the middle of the Platani River Valley.

Walk through the narrow streets of this quaint village with stops, tastings and MEETINGS: from the dairy where we will taste local cheeses produced daily by a local family, to the antique oven with a tasting of “pani cunzatu” with local olive oil and pepper, almond biscuits and honey, etc., and a stop to visit the local craftsman to admire his work.

The walk continues outside the village to visit the Tomb of the Prince: the largest tholos tomb in all of Sicily. Continuing, we reach the base of the hill to go down to the cave of the Ciavuli Caves Nature Reserve, one of the most important examples of Sicilian karst formations. Continuing among olive trees, almond trees, pistachios and prickly pears, we arrive at the southern ridge of the archaeological area with about 110 new tombs unearthed in 2007.

Using an old path that the peasants used to travel with their mules and donkeys, we return to the town with a panoramic view over the valley of the river Platani and Monte Castello. In the village, a buffet lunch will be served in a dedicated courtyard prepared for our guests by local families.

Among the streets of the village of Sant’Angelo Muxaro, we will listen to the stories of the inhabitants themselves. It is the story of an authentic and genuine Sicily, from the people themselves.

Dinner (not included) and overnight stay 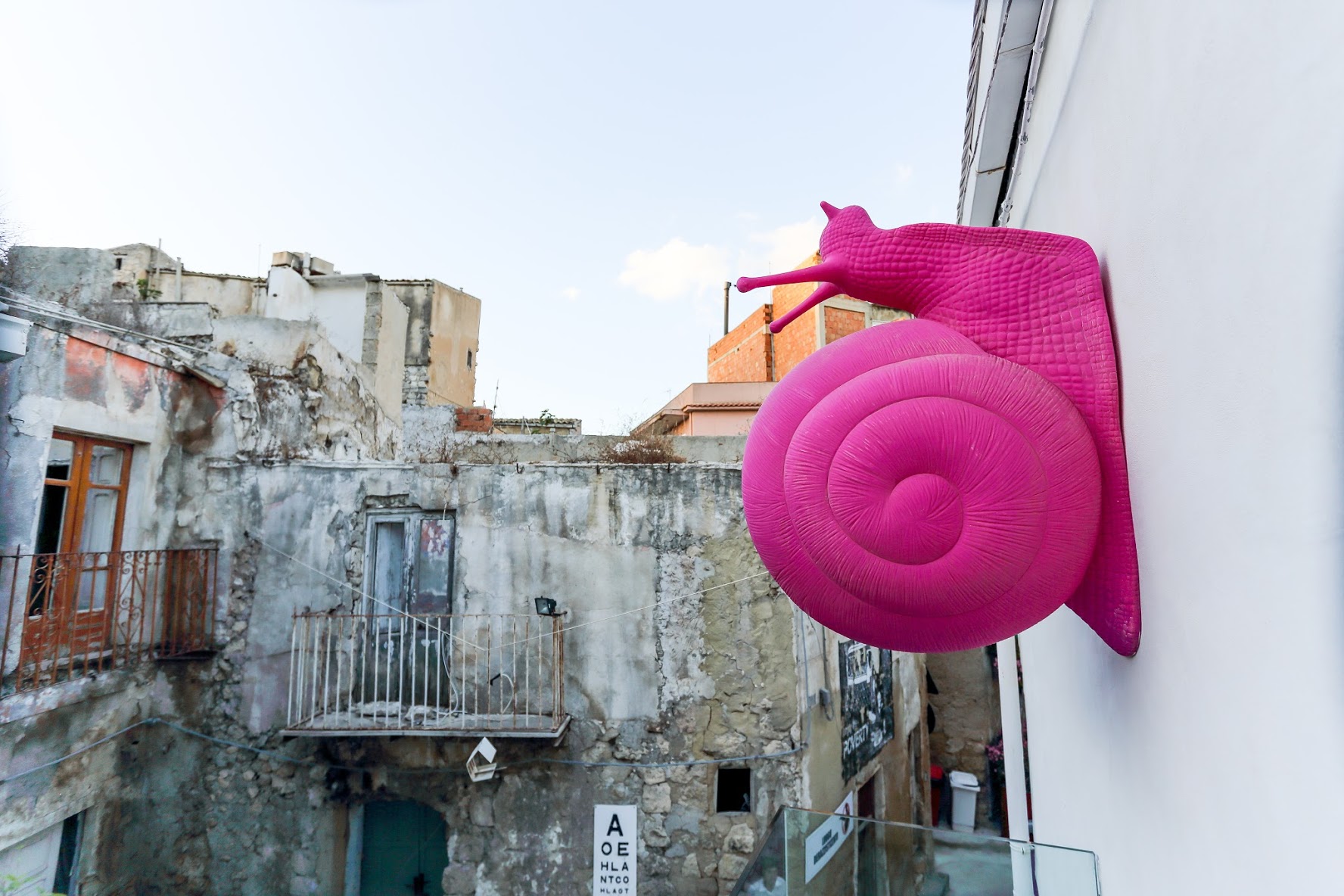 Palma di Montechiaro and Favara – The Leopard and contemporary art

After breakfast, a private vehicle will follow the path of the Leopard, to discover the magnificent monuments attributable to the Tomasi family of Lampedusa. Once in Palma di Montechiaro, our local guide will show us the Ducal Palace, the Palace of the Scolopi and the Benedictine Monastery, where you can taste the famous almond biscuits, prepared according to an ancient and secret recipe by cloistered nuns.

Transfer to Favara to make a visit to FARM CULTURAL PARK, an independent cultural center, located in the heart of the historic center, in a neighborhood called “The seven courtyards” due to its urban conformation characterized by seven small squares. Once semi-abandoned, the houses have been transformed into contemporary art exhibition spaces, meeting spaces, open kitchens for workshops and lunches, cocktail bars, vintage shops and much more. In this way Favara has become the second most visited tourist destination of the province of Agrigento, after the Valley of the Temples.

Among Arab flavors and Sicilian dishes cooked in the FARM’s restaurants, you can enjoy a buffet aperitif made from local produce.

We will then go to a typical restaurant for lunch with a seafood-based tasting menu. Possibility to replace lunch with a cooking class at the FARM, for an additional surcharge.

Walk to the historic center of Favara, for a short visit to the Chiaramonte Castle, then a stop in the Antiqueheart(Fondo) of the Antonio Mendola Library Museum (open every day except Saturday and Sunday) and among the Baroque treasures of the Church of the Most Holy Rosary and along the alleys restored from some parts of the city center with a tasting of typical Favarese sweets: lamb in almond and pistachio marzipan and Pasta Elena.

Dinner (not included) and overnight stay 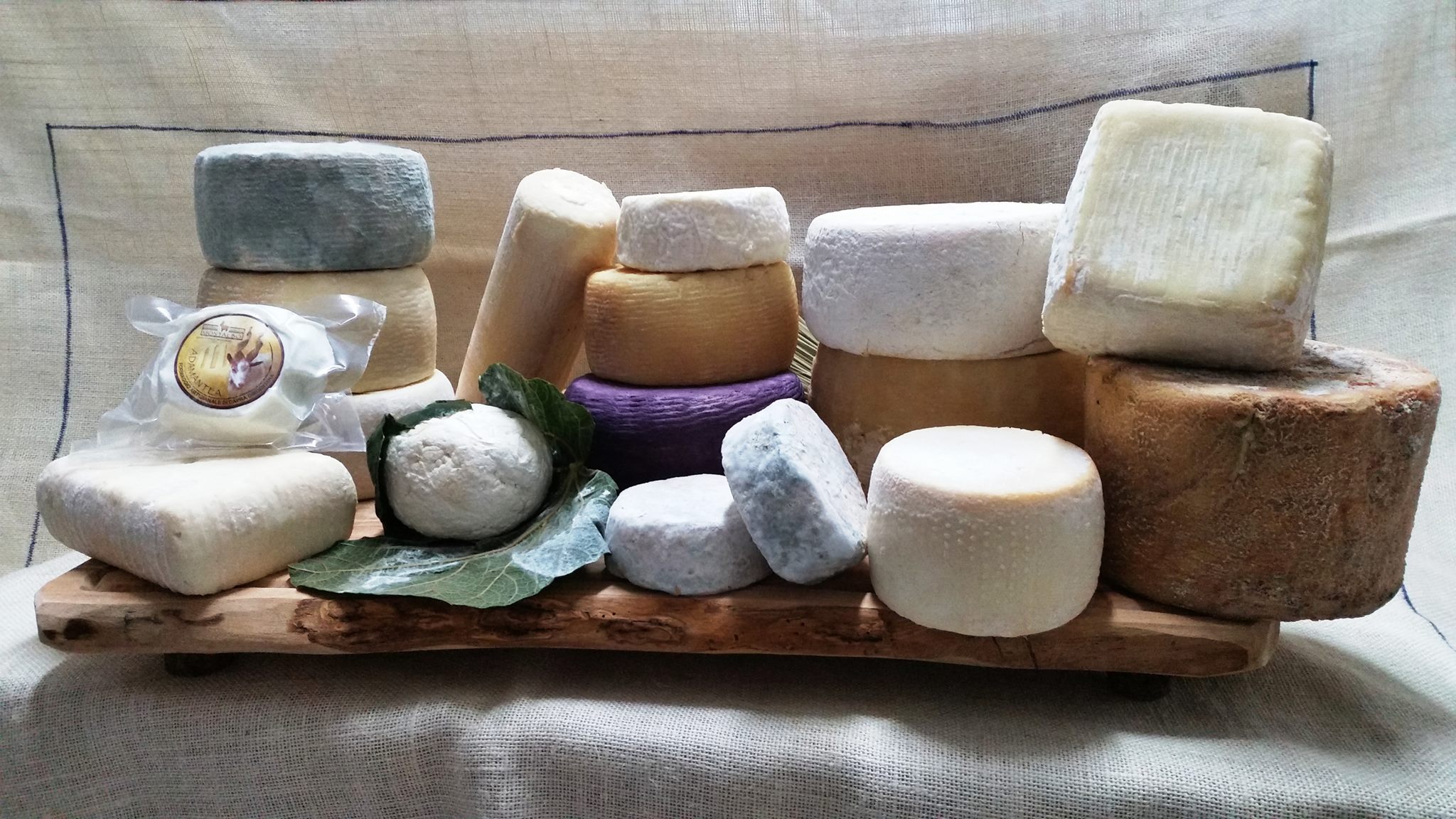 After breakfast, a private vehicle will depart for Naro, a small baroque jewel. Meet with the local guide to visit the Castle from which it is possible to admire an incredible view. Walk along the baroque streets and transfer to Campobello di Licata, a small agricultural center in the Agrigento hinterland, which has been able to express the values of rural culture at high levels and in a transversal manner. Silvio Benedetto artistically expressed them in the murals of the City Palace and in the sculptures of Piazza XX Settembre and Piazza Tien An Men, and various farms that boast prestigious awards have effectively brought them forward as well.

Meeting with our local guides and popo a “historic” aperitif in the main square among Campobellesi stories and anecdotes; transfer to the local La Madonnina restaurant for a “COCI E TASTA” (our cooking class in Sicilian) with chef Giovanni Gruttad ‘Auria, who will prepare a lunch with local products from local recipes.

Anticipating the afternoon visit, our chef will introduce us to the goat cheeses of the Montalbo Farm, in a guided tasting accompanied by the wines of the Baglio del Cristo di Campobello of Licata and the Liolà Oil of the Lu Trappitu oil mill.

In the afternoon our local guide will introduce you to the Montalbo Farm, where the Girgentane goats are bred, a native breed from the province of Agrigento that was at risk of extinction despite the excellent quality of their milk. From this good milk curdled with vegetable rennet (fig, artichoke and cardoon) of their own production, the company prepares different types of cheeses: from the Girgenti classic to caciotta, both fresh and medium-aged, with a flowery rind, to a blue-veined paste under ash (of almond wood), to salted and baked ricotta. But also the robiola and the stuffed Tuma, taken from an ancient Sicilian recipe, in which the goat’s cheese is dipped in liquid plaster and aged at room temperature.

Visit to the dairy laboratory and to the breeding of the picturesque goats.

Return to the Relais | Hotel for overnight stay. 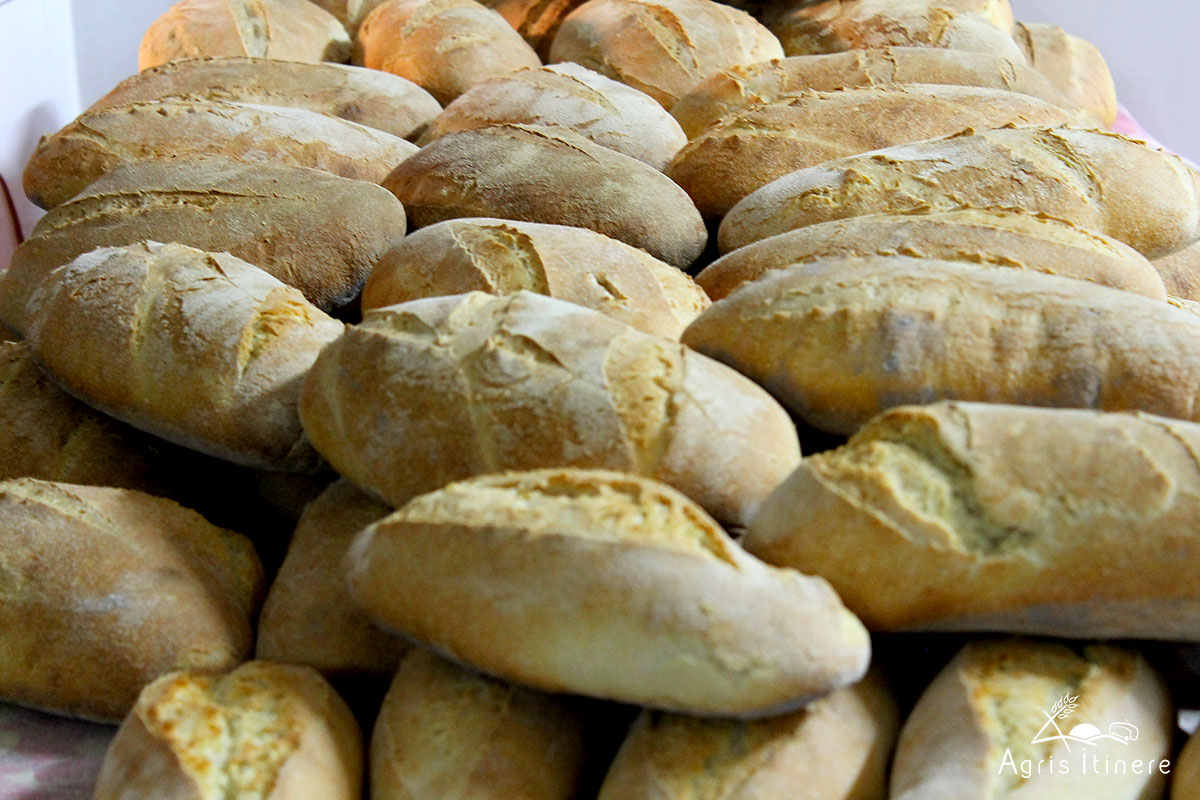 After breakfast, a private vehicle will depart for Borgo Santa Rita, where only five families live permanently, but where the “best bakery in Sicily” has been reborn thanks to the idea of Maurizio Spinello, who opened an exceptional oven in this village.

At the “Forno Santa Rita” bread is made using antique Sicilian grains, and according to the old Sicilian recipe, using sourdough yeast and baking in a wood fired oven.

In 2016, thanks to the recovery and redevelopment of the baronial Palace, the Immaterial Micro-museum of wheat and bread was born, where it is possible to undertake a journey to rediscover the identity of the places, traditions and culture of the village, and that it is a place of learning and protection of knowledge connected to the world of wheat and bread making.

Upon arrival, participation in the bread-making with Maurizio Spinello. Tasting of bread accompanied with olives, oils, cheeses and local pizza. After the guided tour of the immaterial Micromuseum of wheat and bread, of the Church and of the bell tower, lunch in the kitchen of the Museum prepared with local products and recipes, accompanied by local wine.

At the end, departure for Catania. Transfer to the Hotel for overnight stay. 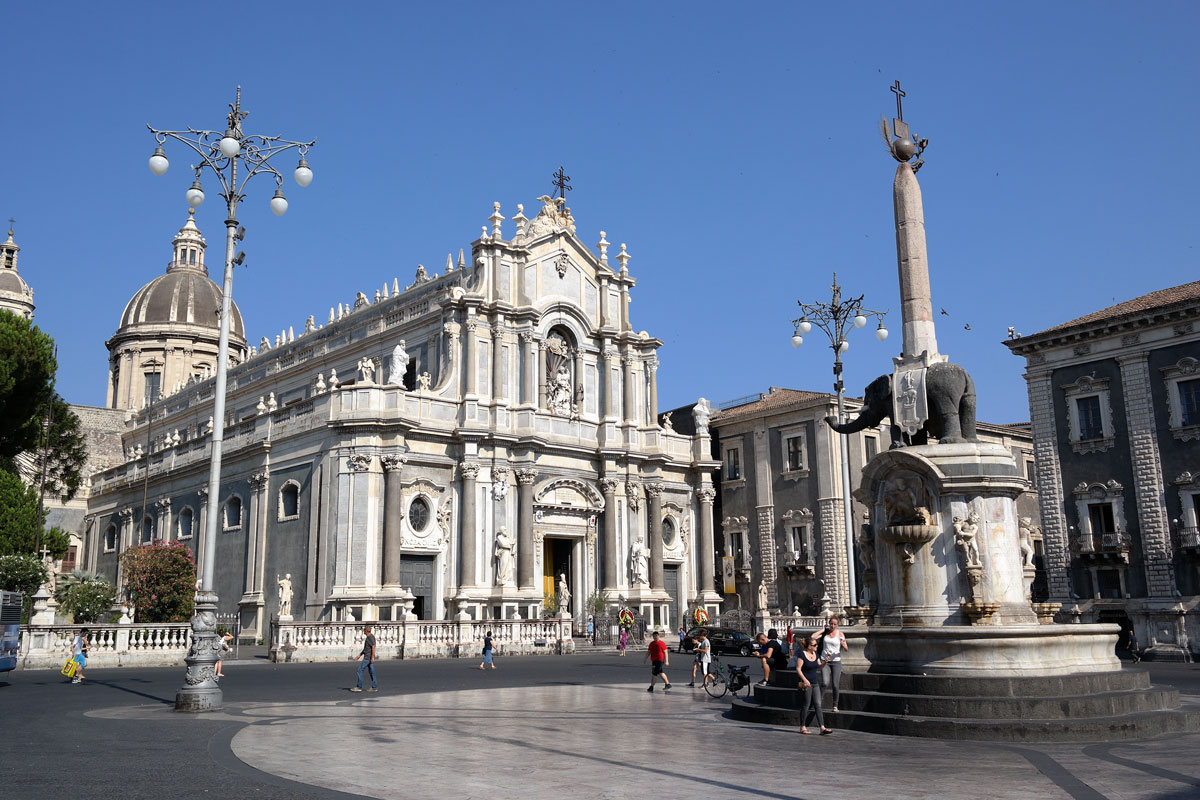 After breakfast at the hotel, departure at will according to the flight.

Personalize your experiential tour in Sicily!

Choose the duration, the period, the stages and the experiences in Sicily.